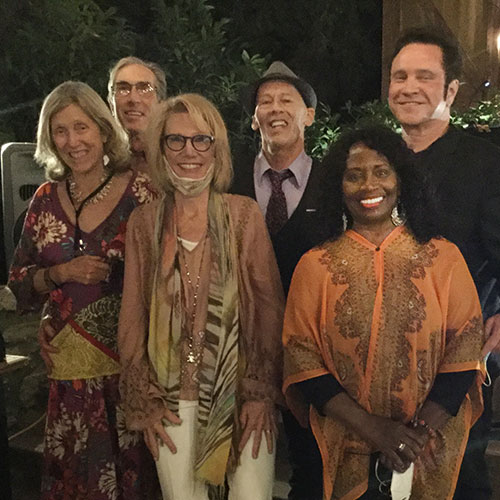 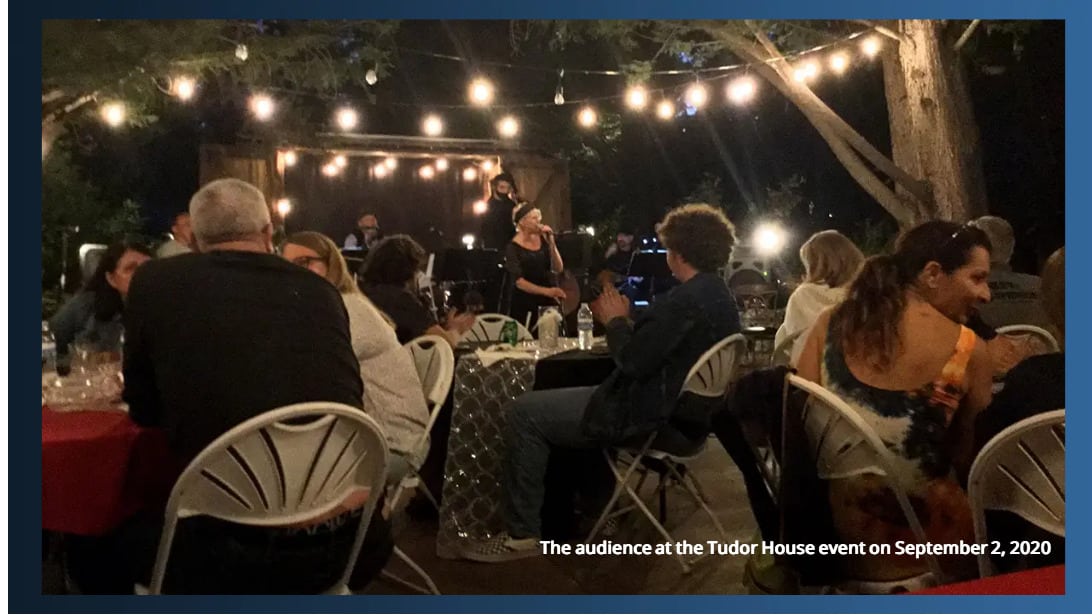 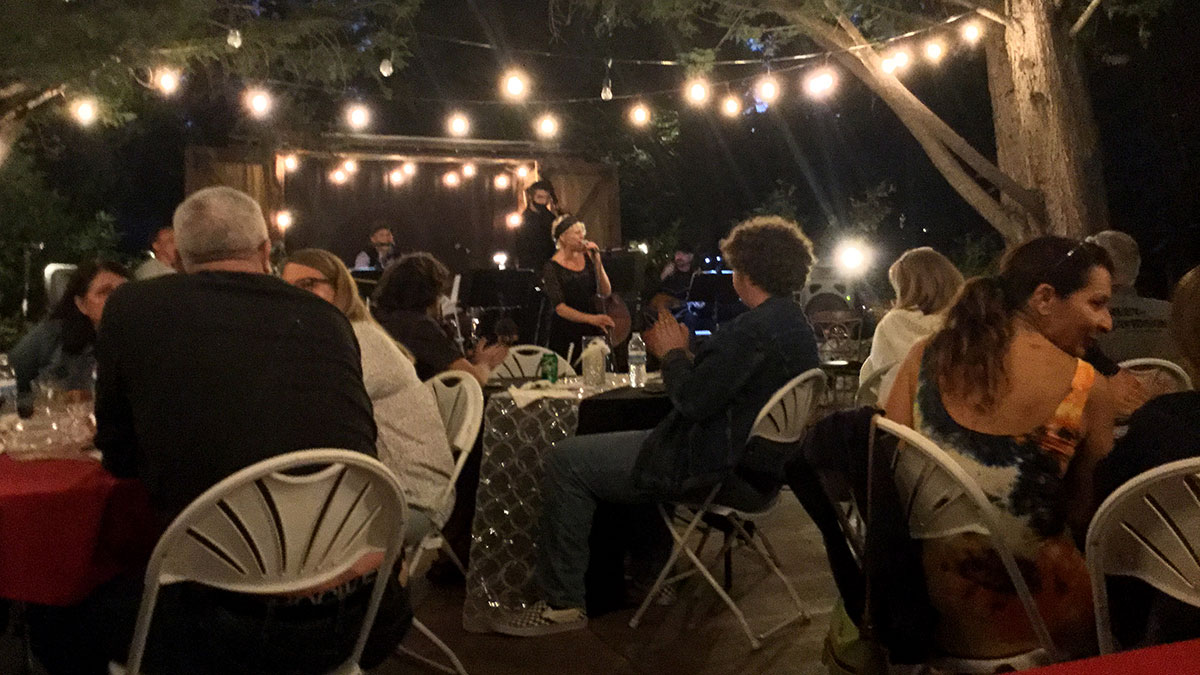 The audience at the Tudor House event on September 2, 2020 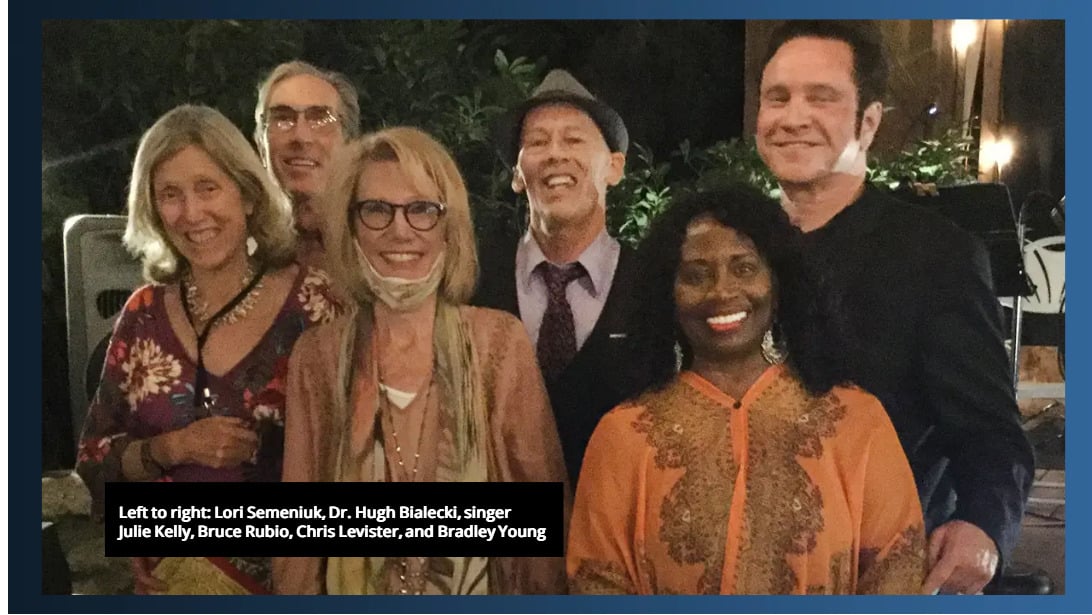 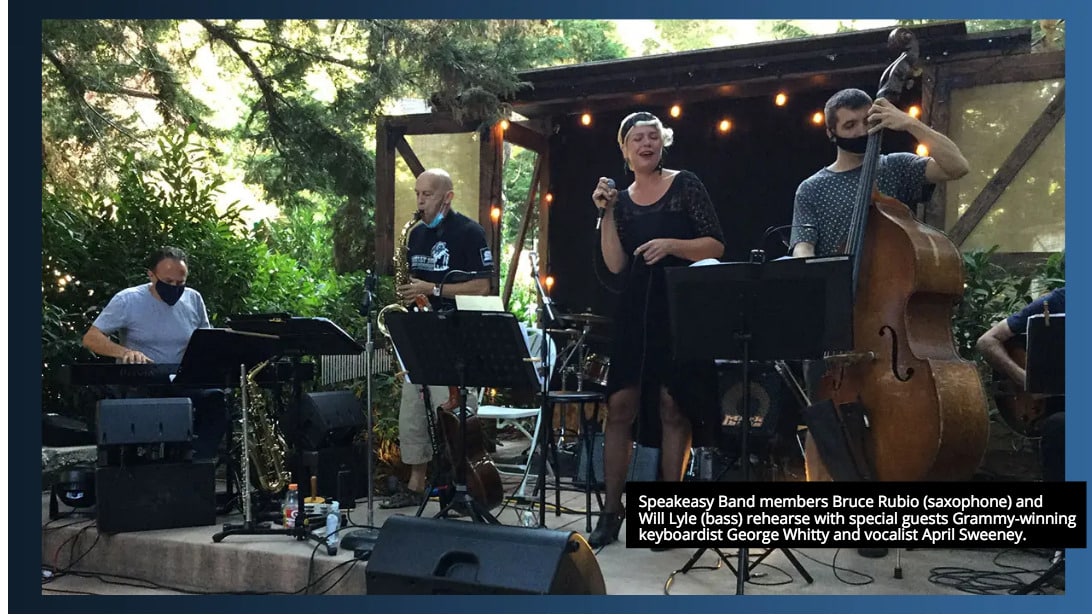 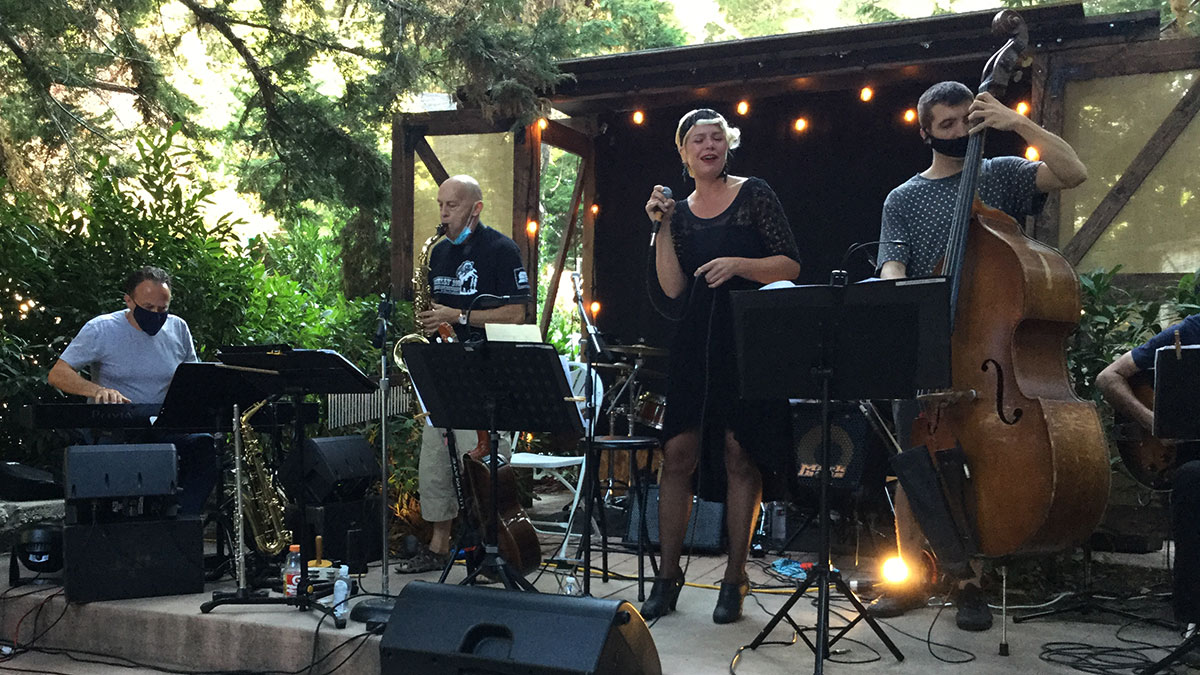 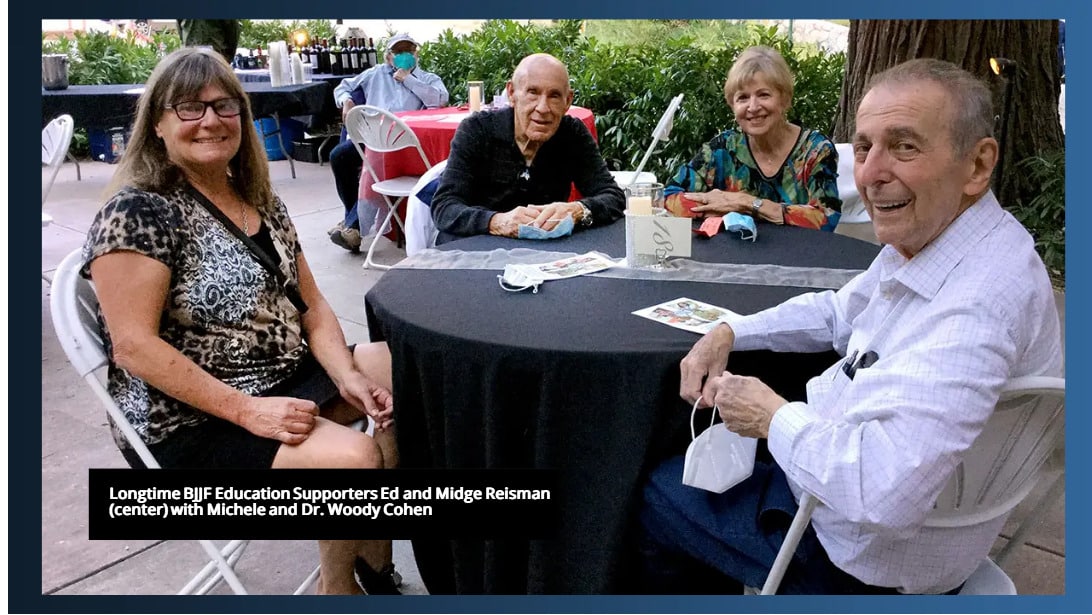 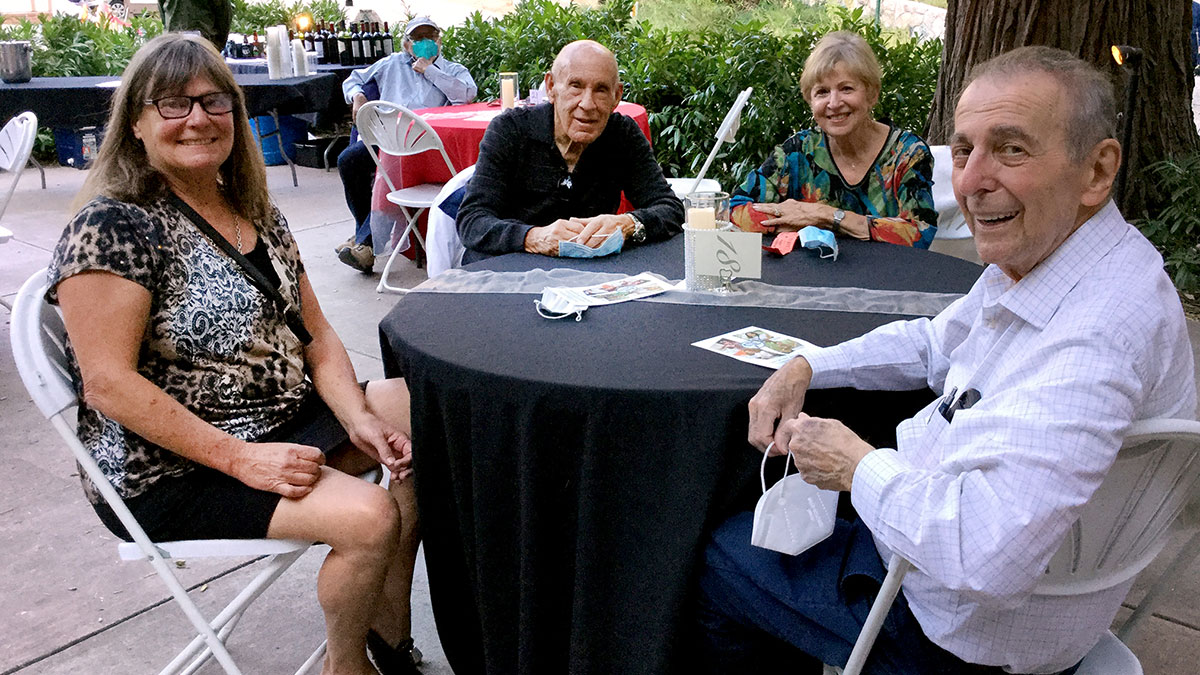 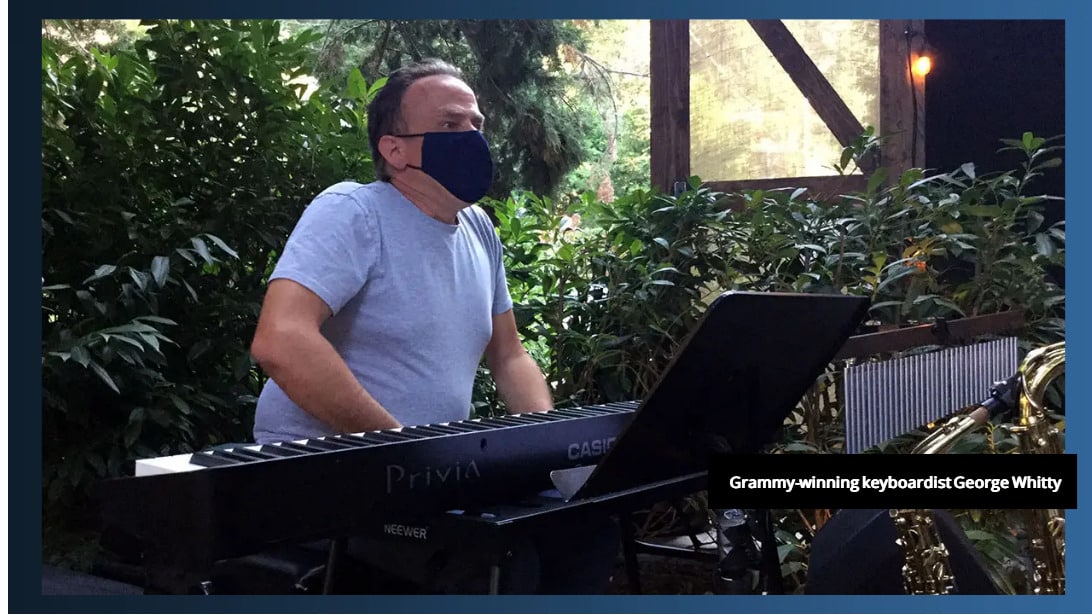 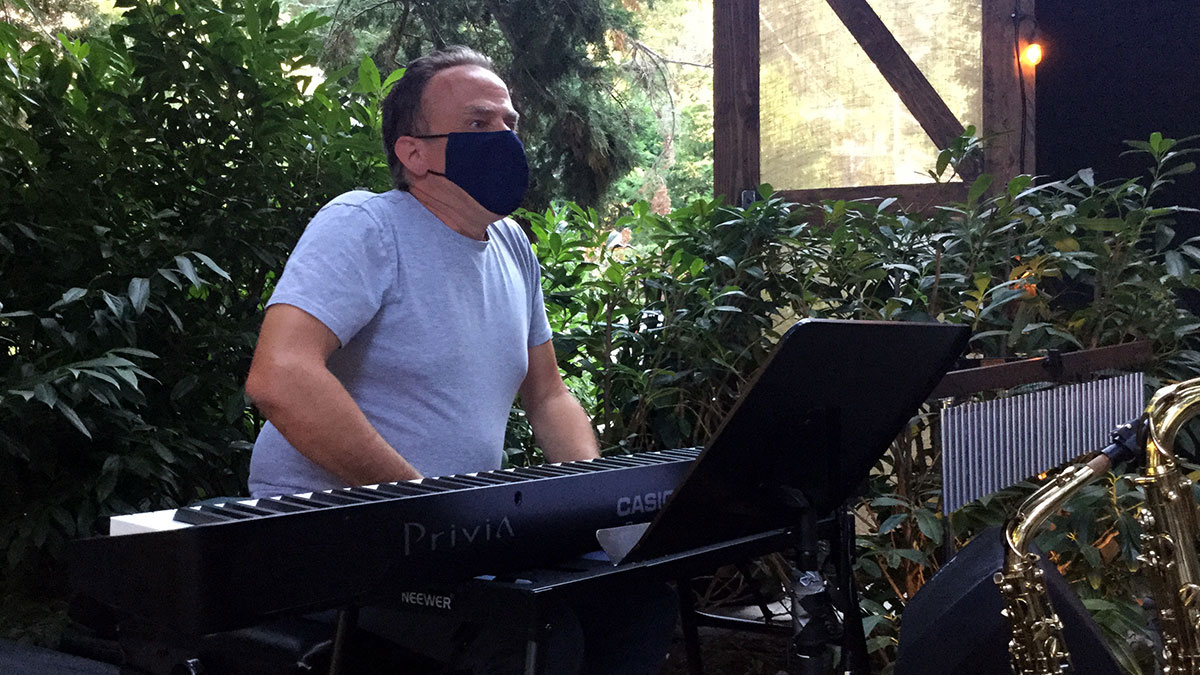 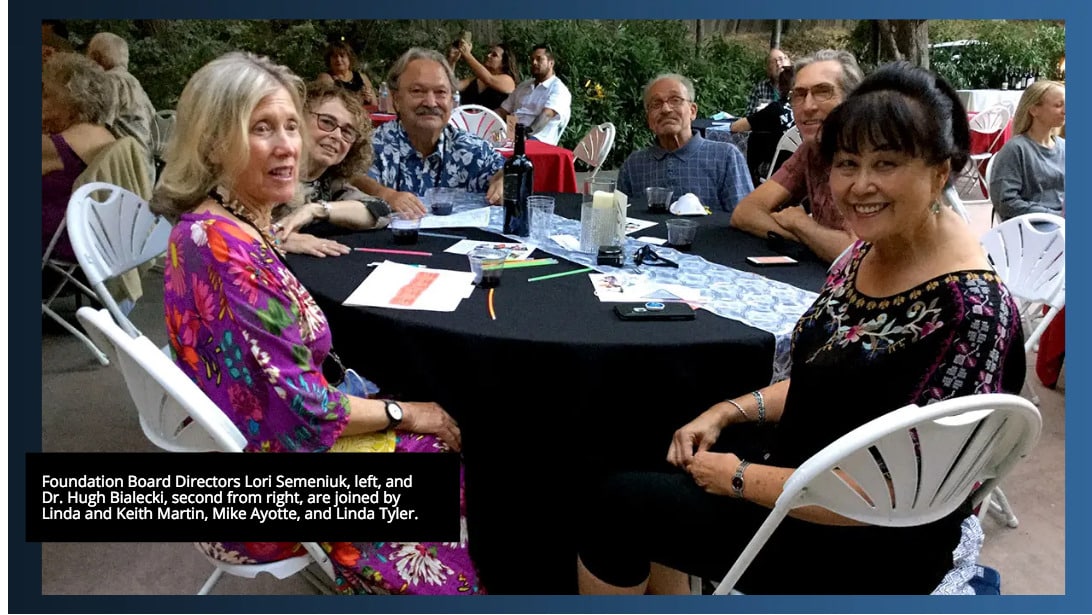 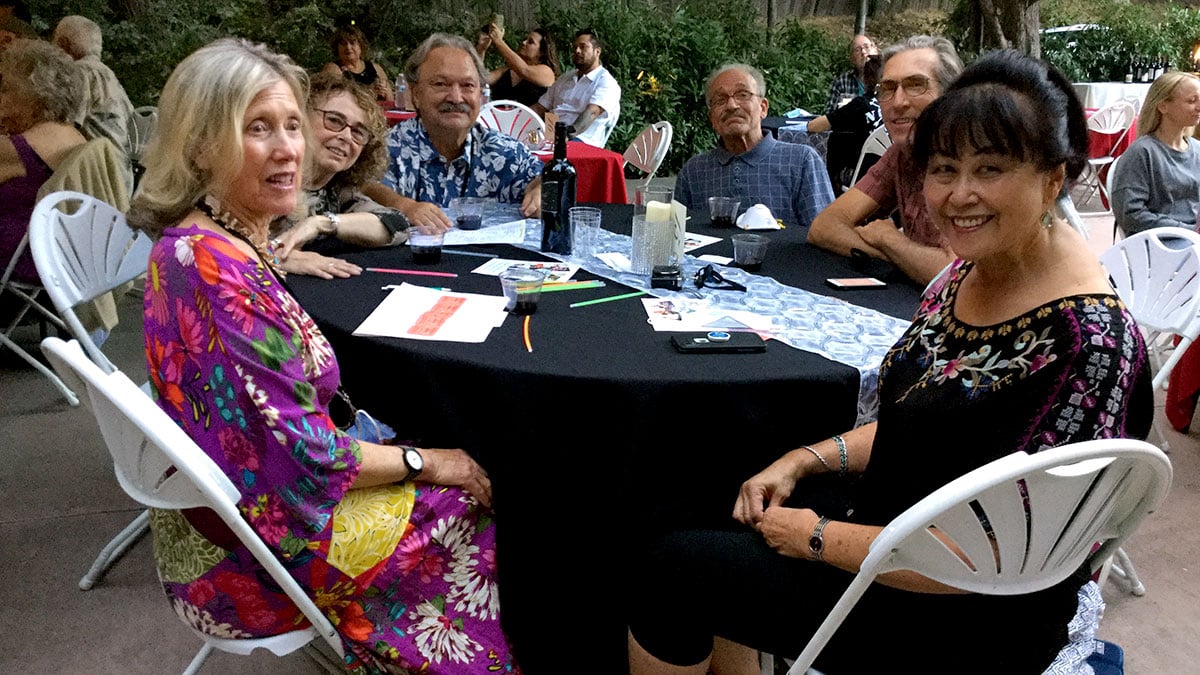 On September 2, two days after students in Rim of the World High School's jazz and marching bands picked up their instruments for a new school year, their Music Director told an audience gathered on the Tudor House patio that preparing those instruments – including needed repairs and a thorough "COVID-cleaning" – had now depleted her entire year's instrument maintenance budget.

Kari Bush then explained the predicament: What happens when one breaks, as inevitably some will during the upcoming nine-months school year?

Fortunately, to mix metaphors with music genres, she was speaking to the choir.

Over 80 guests and musicians had come at the invitation of the Blue Jay Jazz Foundation (BJJF) for a night of outdoor jazz, food and COVID-compliant community support. For this one Wednesday, the Tudor House had made its weekly Jazz Nite series a special event to kick-off the non-profit organization's 2020-21 campaign to raise funds and awareness in support local school music programs, including its invaluable "Give an Instrument, Inspire a Musician" program.

More than a half-dozen working instruments, donated prior to and at the event, will now become part of Blue Jay Jazz's supply of loaners for students who, unable to afford instruments of their own, would otherwise not be able to participate in their school's music program.

More than $1000 – in cash donations and proceeds from the event – was also raised to help maintain instruments during the year.

The evening was a big success, according to BJJF President Chris Levister, who thanked Denise Whitty for donating an Amati cornet in impeccable condition, and the Estevan Bennett and Stephanie Lewis Family for giving a saxophone, clarinet and flute, and flute.

Bruce Rubio's popular Speakeasy Jazz Band, led by the saxophonist and former Rim of the World School District music educator, brought in numerous special guest musicians to join regular guitarist Tom Fernandes, bassist Will Lyle and drummer David Hitchings. Grammy-winning keyboardist George Whitty wowed the audience with a riveting rendition of Someday My Prince Will Come, while internationally acclaimed Los Angeles pianist Bradley Young generated praise with his hard-hitting sense of the past and distinctive flair for the present.

Four vocalists added luster to the show. Julie Kelly performed several tunes while Vickie Bottleson, Shannon Bizzy and April Sweeny, as The Speakeasy Sisters, sang a sparkling program of reimagined classic jazz, blues and swing pieces. There was even a misty-eyed tribute to legendary jazz saxophonist Charlie Parker, whose centennial was August 29.

Rubio was recognized by the Jazz Foundation for his 25 years as a Rim of the World music educator and the positive impact he has made on students attending the event including Cameron Harris. A former Rim High student and 2016 BJJF Future Generation Jazz Scholarship recipient, Harris is a budding guitarist, composer and sound engineer for artists such as Cheap Trick, Brantley Gilbert and Halsey.

"Thanks to the Blue Jay Jazz Foundation's efforts to raise money for repairs throughout the school year," Bush said, "if a student's instrument needs fixing we will be able to quickly substitute one that works and keep that student playing while we repair it.

"When I tell people I am a high school music teacher, they assume the programs have been suspended and I am unable to work" she continued. "I let them know that while remote music instruction and ensemble jazz playing is indeed a tremendous new challenge, Nothing is impossible … Nothing is impossible. Schools are still playing music all across the mountain and keeping students engaged and excited about learning."

"Right," shouted one of the supporters in agreement, sparking loud applause from the entire audience.

The venerable Tudor House showed again that it is a fine venue for jazz. Speakeasy Jazz Nites continue every Wednesday 6:30 to 9 p.m.